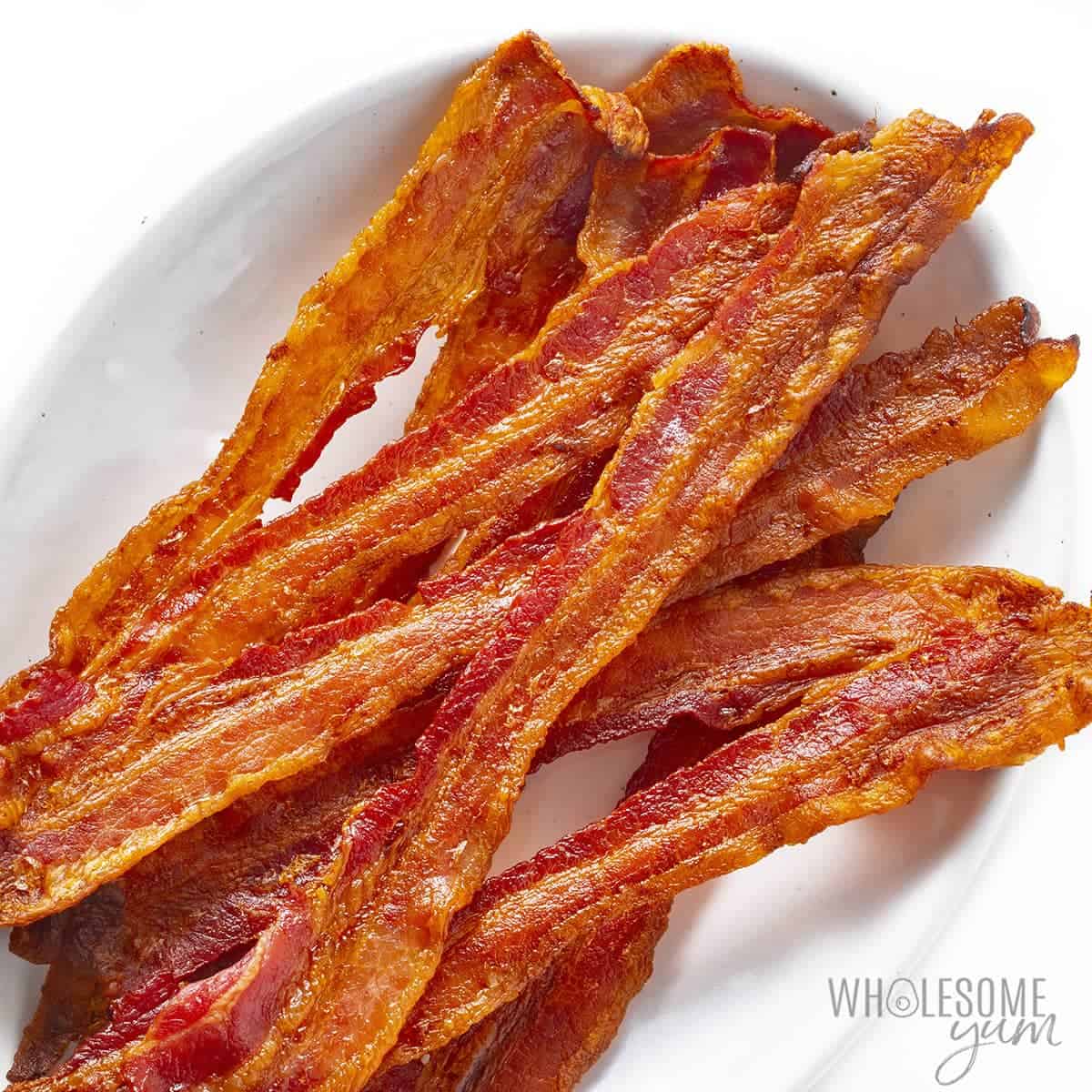 When you cook bacon for your next meal, it’s important to know how to keep it crispy after it cools. You can’t just throw it in the fridge and forget about it. Bacon gets soggy if it’s stored in a dish. Here are a few tips to help you keep cooked bacon crispy.

How do you keep leftover bacon crispy?

Once you have cooked some bacon, you may want to store it for later use. Bacon keeps for at least a few days in the refrigerator, but you can also freeze it for up to a month. Before freezing, make sure to cook the bacon to your desired crispiness. To prevent the bacon from getting soggy, make sure to wipe it dry with a paper towel.

When you have leftover bacon, you may wonder how to keep it crisp. You can try covering it with a towel or foil to prevent it from losing its crispiness. The problem with this method is that paper towels and foil trap moisture and make the bacon limp. Using a cooling rack is another option. You can also use the grease from bacon as a cooking oil. This fat makes tasty fried potatoes.

Bacon is a great snack and should not go to waste. However, there are times when we end up cooking more than we need. In such cases, we should store the leftover bacon in the freezer so it will last for longer.

Can bacon be cooked ahead and reheated?

If you plan to prepare a large meal with bacon, you can cook and refrigerate your bacon in advance. Then, you can quickly reheat it in the oven or a toaster oven to a desired crispiness. Either way, you can save time in the morning by having your breakfast ready.

Reheating bacon in the microwave is very easy, but you have to remember to follow certain instructions. First, place the bacon on a plate lined with paper towels. Place the bacon on top of the paper towels to absorb grease. Second, microwave the bacon quickly, but it only fits small pieces at a time. You may need to reheat it in batches if you need to cook more than a single serving.

If you don’t want to reheat your bacon in the microwave, then you can place it in a preheated oven. To ensure an even cook, check the bacon regularly. When reheating the bacon, remove it from the oven, and wipe off the grease. You can also use a non-stick skillet to cook the bacon. Grilling is another option, but it’s important to be careful not to overcook it.

How do you store cooked bacon the next day?

To keep cooked bacon crisp the next day, store it in a plastic bag (vacuum bag is best). Label it with the date you stored it and put it into the freezer. However, it is important to defrost cooked bacon before using it. There are several ways to defrost bacon. Each has its own advantages and disadvantages.

Refrigerating cooked bacon helps it retain its crispiness for up to five days. To make it last longer, cook it just a little less crisp than you would like. Then, reheat it later for a crispier snack. Another way to keep cooked bacon crisp is to prop open the oven door with a folded paper towel.

You can also dry it by placing a cooling rack over a sheet pan. The cooling rack should be covered with paper towels to absorb any excess fat. Once the bacon has cooled, transfer the slices to the cooling rack and let them dry for a minute before serving. Refrigerating and freezing cooked bacon will not affect its crispiness, but reheating it will help re-achieve the desired texture.

How do restaurants get bacon so crispy?

One of the best ways to preserve a crisp bacon is to freeze it. Place it in a bag or food saver. This way, there is no air surrounding the bacon to increase the risk of freezer burn. Also, group the bacon pieces together to create a double barrier against freezer burn.

The next best way to maintain a crispy bacon is to bake it. The trick to baking bacon is to keep the temperature of the oven moderate so that the bacon does not burn. To cook bacon in the oven, heat the pan on a medium heat. Flip it over after about 10 minutes.

Another way to preserve bacon after cooking is to place it in the refrigerator. You can also cook bacon the day before. If you have enough bacon, you can reheat it in the oven or in a skillet. A microwave is also a great option since it is extremely effective at removing moisture. When using the microwave, place the bacon on a paper towel-lined plate and microwave it at 30-second intervals.

Can bacon be left out after cooked?

Bacon is a delicious meat, but it can’t be left out for too long. Bacon can develop bacteria even after it has been cooked, and this can lead to food poisoning. Bacon is usually served at room temperature and should be refrigerated, but it should not be left out overnight.

The last sign that bacon is spoiled is mold growth. This may appear as green particles or as organic growth. If you find any of these signs, discard the bacon immediately. Bacon is a popular food in the US, but it should never be left out for long. This meat should have a soft pink color and should smell sour.

Bacon can be refrigerated or frozen and can last up to two months if stored properly. However, you should always cook bacon to the desired crispiness before storing it. You should also make sure that the bacon is completely dry before you store it in the refrigerator.

Can you cook bacon and save it?

You can cook a large batch of bacon and store it for up to five days in the refrigerator. However, it is best to consume it as soon as possible. Bacon will lose its original taste after a few days, so you may want to use it soon. You can also freeze it if you have leftovers.

While cooking bacon, keep in mind that it is a smoked product. Bacteria can grow quickly at 40 to 140 degrees Fahrenheit. As a general rule, if the bacon is left out at room temperature for more than 2 hours, it will become spoiled. You can keep it in the fridge for a maximum of four to five days before it loses its flavour.

Using food savers or plastic bags is another good way to store bacon. This way, the air surrounding the meat is reduced, which minimizes the possibility of freezer burn. Also, remember to wrap it tightly to prevent oxygen from getting through.

How do you cook bacon ahead of time?

If you’re preparing a large number of dishes, cooking bacon in advance can be a great way to make sure it’s perfectly crisp. Then, when you’re ready to serve, you just reheat it until it’s as crisp as you like it. You can reheat it in the oven or a toaster oven.

If you’re planning to cook your bacon ahead of time, be sure to keep the slices separated and covered. They won’t get as crispy if they’re too close together. When you reheat your bacon, place the strips on a baking sheet lined with paper towels. Once you’ve cooked your bacon, place it in the refrigerator.

Bacon can be frozen for a long time. You can use food savers or freezer bags to store it. If you’re freezing it, make sure to put it in an airtight container so there’s no air in the freezer. If it’s not possible to keep the bacon crisp in the freezer, use plastic wrap.

Can u cook bacon the day before?

It’s easy to cook bacon the day before, and you can save even more time in the morning by reheating it! Bacon reheats well, so you can cook it for a quick breakfast or even a week’s worth of lunches! Not only can you reheat it, but you can also pack it in individual portions for easy storage.

Cooking bacon ahead is convenient, especially if you plan on making a lot of it. Just be sure to cook it until it’s crisp, so it will stay crisp and delicious when reheated later. If you need to reheat the bacon later, you can simply pop it into the oven or into a toaster oven.

You can also reheat bacon the day before in the microwave. First, make sure that you use a preheated oven. Then, place the bacon slices on a baking sheet lined with aluminum foil. This will make clean-up easier.